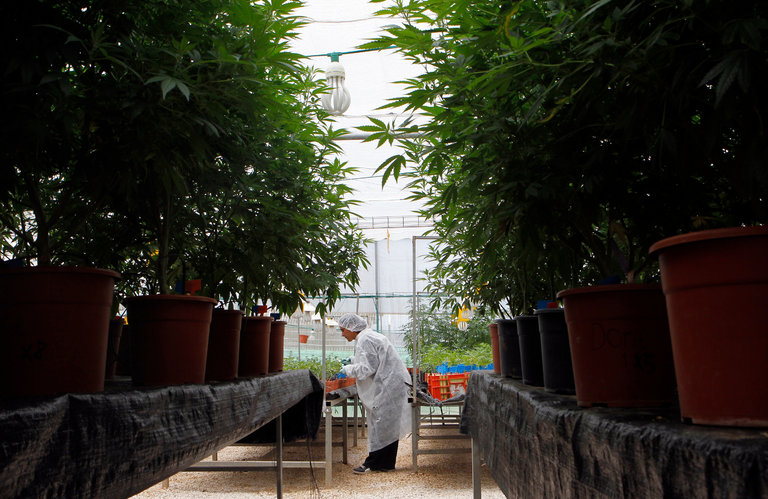 JERUSALEM — Israeli scientists began their pioneering research to isolate the psychoactive ingredient in marijuana with a 10-pound stash seized by the Tel Aviv police. That effort, in the 1960s, helped propel Israel to the vanguard of research into the plant’s medicinal properties and lay the foundations for a medical marijuana industry.

Marijuana, or cannabis, is still classified as a dangerous drug in Israel and remains illegal for recreational purposes. But the government is also at the forefront of efforts to develop and expand the fast-growing medical marijuana industry and make Israel a major center for it.

Recent government efforts to regulate medical marijuana will make it more accessible and available by prescription at pharmacies. The government has also appointed a committee to examine the possibility of Israel becoming one of the few countries to allow exports, although the destination for products remains unclear.

The Volcani Center, the Ministry of Agriculture’s research organization, is building a national institute for medical marijuana research. The chief scientist’s office of the Ministry of Economy has infused millions of shekels into innovative marijuana companies, much as government investment helped fuel the Israeli tech boom in the 1990s. The government is also setting standards for the cultivation, storage and use of medical marijuana.

“It is almost unprecedented,” said Tamir Gedo, the chief executive of Breath of Life Pharma, an Israeli company permitted to grow medical cannabis and make and distribute products. “It seems the government is working faster than the private industry.”

The reforms spearheaded by the Health Ministry, which is led by Yaakov Litzman of the ultra-Orthodox United Torah Judaism Party, open up licensing for an unlimited number of growers, up from eight farms. The list of doctors trained and authorized to prescribe marijuana is to be expanded and research encouraged. The reforms, which were approved by the government in the summer, were formulated in cooperation with the Ministries of Agriculture, Justice, Internal Security and Finance.

“I cannot say that I am in favor of cannabis,” Mr. Litzman said at a business conference last month, reflecting concerns that medical marijuana could trickle into the recreational market. But Mr. Litzman said he would even support the idea of export so long as revenues went to the Health Ministry, adding, “There is a lot of pressure on me.”

Some of Israel’s more traditional medical institutions and associations are still averse to joining the party, a wariness that marijuana advocates put down to a lack of knowledge. The police worry about leakage into the recreational black market, and some Israelis are concerned that export, if allowed, would stigmatize the country as one that dealt primarily in arms and drugs.

About 25,000 Israelis, in a population of 8.5 million, hold permits to use medical marijuana to ease symptoms of cancer, epilepsy and other diseases, but that number is expected to grow rapidly. So far, medical marijuana has been distributed by the growers through special dispensaries or by home delivery.

The Health Ministry’s written protocols on the matter, known as the Green Book, have generated international interest.

“We wrote this because we couldn’t find it in other countries,” said Dr. Michael Dor, a family physician and senior adviser to the Health Ministry’s medical cannabis unit. “Now everybody is asking about it.”

The ministry has approved dozens of clinical trials, Dr. Dor said, adding, “If we don’t do it right here, the specialists will go abroad with their knowledge, and we have wonderful knowledge here.”

Raphael Mechoulam, now a professor of medicinal chemistry at the Hebrew University of Jerusalem, and his colleague Yechiel Gaoni first isolated the main compounds, including the psychoactive ingredient — tetrahydrocannabinol, or THC — with the marijuana supplied by the Tel Aviv police. When administrators at the Weizmann Institute of Science, where Professor Mechoulam was conducting his research, first called the police with the request, he recalled in an interview, “they asked if I was trustworthy.”

Professor Mechoulam, 86, has continued his research in his current post, focusing on the compounds in the brain that make the active components of marijuana work. He is also a consultant for the Ministry of Health and collaborates with research groups around the world.

“Medicinal cannabis has to follow medical lines of thought and development and modern medical routes” in order to produce proper drugs, he said. Pointing to an international paucity of clinical trials, he said, “Israel has more than the United States at the moment, which is ridiculous.” In the United States, medical marijuana programs exist in many states but remain illegal under federal law.

Professor Mechoulam is also a member of the advisory board of Breath of Life, whose products, according to Mr. Gedo, the chief executive, are made according to pharmaceutical best-practice protocols.

“We are working as a pharmaceutical company, not a cannabis company,” Mr. Gedo said. Breath of Life is participating in a dozen clinical trials, including one based on cannabinoids, the chemical compounds in marijuana, for autism in children with the Shaare Zedek Medical Center in Jerusalem.

According to Mr. Gedo, several American companies are conducting trials in Israel based on Breath of Life’s active pharmaceutical ingredients.

Teva Israel, a subsidiary of Teva Pharmaceutical Industries Ltd., recently announced a distribution and cooperation agreement with Syqe Medical, a Tel Aviv company that developed an inhaler for administering marijuana in precise doses. The dose can be tailored to each patient like a standard medical treatment, which experts say should reduce or eliminate the objections of reluctant physicians.

Israelis have been producing products with varying degrees of THC for years. Another company at the Cann10 conference, Cannabliss, makes medical marijuana oil and other nonsmoking products, works with a professor of immunotherapy and bone marrow at the Hadassah Medical Center in Jerusalem and supplies the hospital’s medical marijuana dispensary.

“We hope the market will open up in the world as soon as possible,” Moshe Ihea, Cannabliss’s founder and chief executive, said. “First we have to open up the people.” He added that he had discovered the medicinal benefits after he suffered a leg injury during an army exercise.

Saul Kaye, a pharmacist and the chief executive of iCan: Israel-Cannabis, a venture fund and technology incubator for start-ups driving the global medical marijuana industry, said this “could be another incredible economy for Israel.”

He added, “There’s a national consciousness for cannabis that you cannot ignore.”